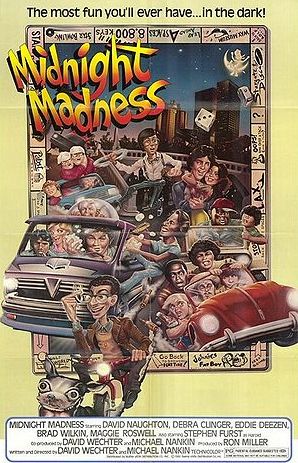 Midnight Madness is a 1980 film from Walt Disney Pictures, featuring an all-night scavenger-hunt-type game put on by a nerdy mastermind named Leon. In this game, five teams of various stereotypical groups race around the Los Angeles area searching for hidden clues that will ultimately lead them to the final destination and victory. Originally released without the Disney brand and with a dismal box-office run in theaters, the film became a Cult Classic after it hit the pay-cable-channel circuit. It is most notable for: starring David Naughton, who at the time was best known for dancing around in Dr Pepper commercials; being Michael J. Fox's first big-screen role; and having a brief appearance by a pre-Pee Wee Herman Paul Reubens.