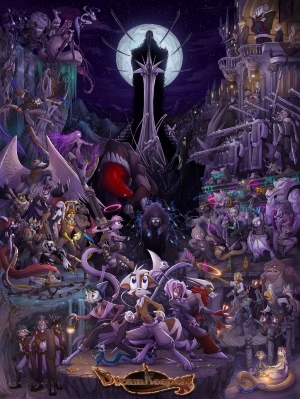 Our only defense against the rising Nightmare Legions...
"All Dreamkeepers have a power… But in the city of Anduruna, powers have been outlawed. 'Infractors' face the regulatory force of the shock troopers. Because in a perfect city, there is no place for violence, and the nightmares of legend can be safely dismissed as ancient fiction.
…Until now".
— Dreamkeepers intro page

Dreamkeepers is an independent comic series produced by David and Liz Lillie. It tells the tale of a small group of young Dreamkeepers, beings who live in a dream world parallel to ours and only glimpsed in dreams. Each one is tied to a human on earth, yet they are as ignorant of us as we are of them. Even so, their mere existence protects our dreaming minds from the Nightmares, villainous creatures who despise all life and wish for nothing more than its destruction. And if a Dreamkeeper is killed in the dream world, the Nightmares can attack their human counterpart unhindered.

To prevent this, the Dreamkeepers all have a unique power to protect themselves and their friends. For many years, they have used these powers to fight back against the Nightmares and finally managed to defeat them in a great battle long ago. However, Nightmares never die, and generations of peace have bred complacency among the Dreamkeepers, even going so far as to outlaw the use of their powers. And it's only a matter of time before the Nightmares return.

It depicts the childhoods of the main characters and is much more light-hearted than Dreamkeepers itself. Even though everyone apparently had a rotten childhood. Mace and Whip live in a run-down orphanage run by a cantankerous old sailor, while the sisters Namah and Lilith deal with their own problems of life as the daughters of the Viscount, elected leader of their city. And then there's Bast, who apparently has it worse than anyone (though it's yet to be shown in Prelude).

The comic doesn't exactly have a set genre. The author himself admits on the Intro page that "[Dreamkeepers] has been described as fantasy, as sci-fi, horror, humor, action, anime, Disney, etc." though he does not nail it down as any of these. On top of the print and digital versions of the books, the entirety of Volumes 1 and 2 are available to read for free on the official site

, with Volume 3 being made available as soon as Volume 4 goes to print. They intend to keep this release schedule for future volumes.

This has a character page now. Please contribute.