Video Game / The King of Dragons 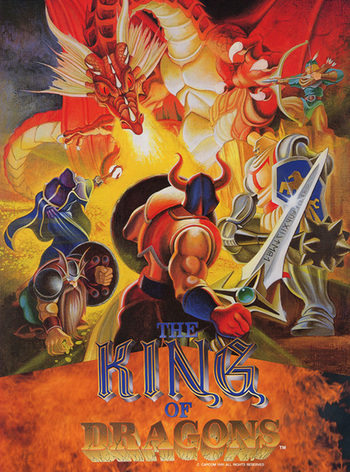 The King of Dragons is a 1991 Medieval European Fantasy-themed Beat 'em Up/Hack and Slash with a spice of Action RPG from Capcom, released first in arcades and later ported to the SNES in 1994. The game is very similar in gameplay to Knights of the Round, specially in its level-up system, but it has also weapon upgrading similar to Magic Sword. Each of the 5 selectable characters has their own strengths and weakness, and they gain experience with each slain Mook and treasure picked. Added to this is a total of 8 swords and shields, found in certain treasure chests, which enhance their attack and defense even more.
Advertisement:

The story is set in the fictional kingdom of Malus, where the evil red dragon Gildiss has woken up after years of slumber. Following his rise, hordes of monsters loyal to him start raiding Malus, spearheaded by the Dark Wizard from Castle Garenos. With even the knights of Malus and Princess Mary unable to face this threat, the task lands upon a group of wandering adventurers who have just come to Malus at the right time.

The game has 5 playable characters, originally only referred by their character class, but later given official names in one of Capcom's artbook compilations.