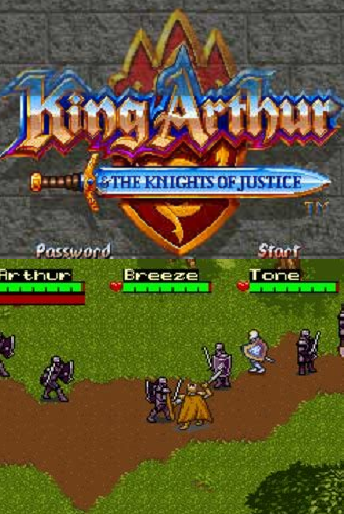 The title screen above, some gameplay below.
King Arthur & the Knights of Justice is a video game for the SNES developed by Manley & Associates and published by Enix. It was released in 1995 as the closing note of the entire franchise.
Advertisement:

As with the cartoon, the premise involves the evil Queen Morgana and her cruel Warlord army, commanded by Lord Viper, trapping the legendary king and the knights of the round table in the Cave of Glass. Merlin searches through time to find suitable replacements for the knights to defend Camelot and finds an Identical Stranger to King Arthur named Arthur King who is a quarterback for the New York Knights, a college football team along with ten of his teammates and their equipment manager. The twelve new heroes are tasked with recovering their shields and the Keys of Truth, one for each knight that only they can initially touch. In doing so, they also have to defeat each of the eight main Warlords, Viper, and eventually battle Morgana herself for the final key that will free the true Knights of Justice and allow the football team to finally return home.

The game is based on the first season of the cartoon, of which the scenarios of four episodes ("The Unbeliever", "Even Knights... Have to Eat", "To Save a Squire", and "The Way Back") are directly recognizable in the game's narrative. Additionally, the development team dug into Arthurian Legends beyond what the franchise already had incorporated to build its own take on. Unfortunately, with the franchise Cut Short, the game ended up rushed and met with largely negative reviews.

Note: This page only lists tropes that don't pertain to other parts of the franchise.

King Arthur and the Knights of Justice contains examples of: