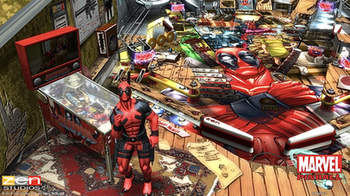 "Prepare yourself for the greatest pinball gaming experience of all time!"
Advertisement:

Zen Studios released their Deadpool Digital Pinball Table in 2014. The character moves around throughout the digital table, comments on the player's actions, and plays a recursive version of the table positioned on the left apron. The table is available as an add-on download for Pinball FX 2 and Zen Pinball 2, and as an in-app purchase for Zen Pinball/Marvel Pinball.

The primary goal is to advance through the nine Chapters, divided into six Issues. These range from fending off Deadpool's Evil Twin to dealing with Haters, with the ultimate goal being a pinball duel against Deadpool himself. There's also the "Sidekick" modes, which include things like cleaning trash off the playfield and repairing Deadpool's suit of power armor. Four different multiball modes round out the package.

Not to be confused with Stern's later Deadpool physical pinball table. Tropes for that go on this page.