Hey there, true believers! Unfortunately TV Tropes wants my pages "clear" and "concise" now and doesn't want this page "crosswicked everywhere." [Does that involve a candle and CrossFit Jesus?] Anyway, I'm only allowed to demonstrate myself here in my own domain if I wanna stay the Merc with a Mouth. [Is that a giant needle and thread in your thigh pouch or are you just happy to see me?] So don't go putting ol' Wade's examples into first-person anywhere else, 'kay?!
Advertisement: 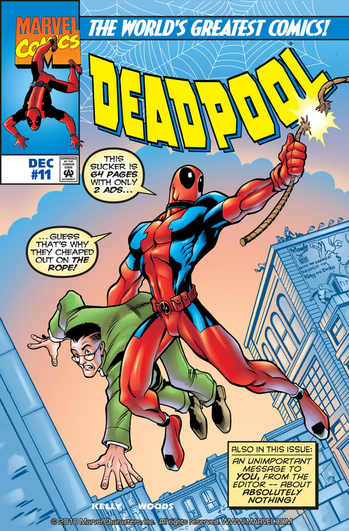 Check me out, Spidey ain't got nuthin' on me! ...Whoopsy-daisy!
"Yay, now is fighty time, fighty time, blood blood blood!"
— Me, giving a lecture on the deep philosophical ramifications of what I represent to the collective unconscious in relation to a post-information age society... after I Shoryukened Kitty Pryde so Wolverine would fight me!

All right! It's time to describe my very own page right here!

Heya, true believers! This is me, Deadpool, A.K.A. The Merc with the Mouth, The Guy Who Won't Die, The Regenerating Degenerate, Chiyonosake,note Wolf of Rice Wine; so cool, I know. and The Crimson Comedian. I'm a Marvel Comics mercenary Anti-Hero character, related to the X-Men and Wolverine in particular. I appeared in print for the first time in New Mutants #98 (February, 1991) as a ripoff of DC mercenary Deathstroke the Terminator. But, that's old news. I'm all-new, I'm all-different, and boy, does that feel good!

I'm in a little bit of EVERYTHING in the Marvel Universe. As you're probably noticing just about now, I loooooove to talk. Yes, it's my most valuable asset: the lungs to provide endless witty banter in the heat of battle! In fact, everybody loves to hear me talk! (Hey! I saw that pothole!)

OK, I know what you're asking yourself: "Why? Why, Wade, why Wade, why?" I've got my memetic monologues, I talk to my loyal (but still weaker) fans (like now, for instance), and I reference all the stuff you love. You lucky, lucky nerds!

You ask, "how did Wade Wilson become the sexiest mercenary alive?" Tricky question, lots of retcons. Best I remember is some nice ice-cream salesmen told me they could fix my terminal cancer by injecting me with Wolverine's man-juice (and by that I mean his DNA. Perv) and I became better, faster, strongerer and even got the ability to heal quickly, so that whenever the cancer shows up it instantly gets fixed... which is good, because it keeps showing up. As in, instantly after it gets fixed. I became so freaking handsome that my brain exploded. Eventually, my magical insanity powers allowed me to figure out that I'm a comic book character. From then on, I became BFFs with my thought bubbles, exposition panels, and Stan Lee. My fellow Weapon X classmates had run a pool to figure out which one of us would be dead first, so I naturally named myself Dr. Professor Carlos Winston Lazarus McBatman. Then I realized that I couldn't spell it, so I went with Deadpool instead.

Anyway, so you wanna know my fighting style, huh? Why, being absolutely rassum frassum crazy is my fighting style, kiddies! Don't Try This at Home! Wait... y'know what, go ahead; makes my job easier in the long run. Guns, explosives, guns, my trusty katana, guns, anything I find on the ground, guns, doorknobs, guns, and firearms are all ways I kill people.

Now, can you say "media whore"?
KA-CHING! Remember how I said I'm in everything?

Some of the many beautiful tropes that describe me include:

open/close all folders
A-F
G-N
O-Z
Well, I've got to go. There's a killer itch on my butt that needs a scratchin' and my microwaved burritos are almost done. I promise we'll fight some ninjas or some other crap later. See ya!