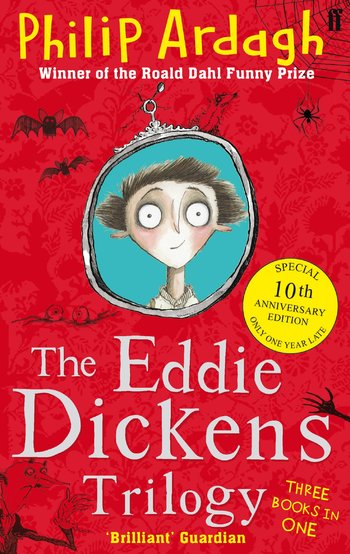 The Eddie Dickens Trilogy is a series of books written by Philip Ardagh, British author of children's books. In an author's note for American readers at the beginning of the first book, Ardagh claims that the books were written in installments of letters for his nephew Ben, who was away at boarding school. The plot of these books revolves around Eddie Dickens, a young boy living in Victorian England. Eddie is a boy of average mind, for his time, but unfortunately, everyone around him is inexplicably insane.
Advertisement:

In the first book, A House Called Awful End, (Simply Awful End in the UK) Eddie's parents (who are suffering from an unnamed disease that makes them yellow and crinkly around the edges) send him off to live with his great uncle, Mad Uncle Jack, and his great aunt, Even Madder Aunt Maud. After an unfortunate incident involving a pocket watch and the Empress of All China, Eddie is sent off to an orphanage and must use his wits to escape.

In the second book, Dreadful Acts, Eddie's family has moved into Awful End with his aunt and uncle. Eddie falls in love with a girl and becomes involved in an unfortunate plot revolving around murderous criminals. This book involves the Great Zucchini, a giant fake cow named Marjorie, and British moors.

In the third and final book, Terrible Times, Eddie is sent to America on a ship. To his credit, Eddie expects the worst when his trip is interrupted by a criminal, a man called Jolly Roger, and the infamous Dog's Bone Diamond.

Was followed up by a second trilogy called The Further Adventures of Eddie Dickens.