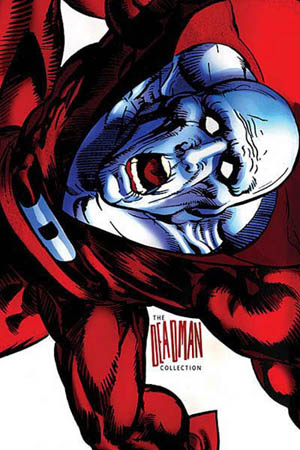 This is how you people spend life?!
Famous last words. Mine were "You know, from up here it almost looks like that guy with a hook is holding a rifle..."
—The ghost of Boston Brand
Advertisement:

(Best done in the voice of Raphael Sbarge or Michael Rosenbaum.)

So yeah. Lemme tell you a bit about myself. The name's Boston Brand, aka Deadman. Before I was killed, I used to be a circus trapeze artist who performed under that name and used the nice costume you see before you. I admit I wasn't the most pleasant guy under the big top (I was co-owner and would you put up with drunken lion tamers and embezzling employees?) and my girlfriend didn't care for my macabre style for my act, but life was good, until it ended. During one of my performances, I was assassinated by someone in the crowd with a hook for a hand. The bullet shattered my back, but it was the fall that killed me. Despite all this, my spirit was given the ability to possess any living being by Rama Kushna, a powerful Hindu goddess, so I could find whoever killed me and earn some justice in this world.

I first appeared in Strange Adventures #205 (October, 1967). Initially I was written by Arnold Drake (Ya heard of him? He used to pal around with the Doom Patrol) and drawn by Carmine Infantino, although they got replaced by Jack Miller and Neal Adams - him you've definitely heard of, he's a friend of Batman's - after my first appearance, and I got to be depicted by an artist who would redefine the medium's visual style as radically as I tried to with the trapeze act.

So I came back from my meeting with Rama, and found a bunch of smugglers who were using the circus as a front for smuggling drugs (the first Comics Code-approved story to have narcotics mentioned, years before Stan Lee butted heads with the CCA with his Spider-Man story). Being dead, that stuff technically wasn't my business anymore, but it seems my conscience was still alive as ever and I had to step in as I traded in my acrobat calling for the Super Hero one. So, while I was looking around for my killer, I kept getting sidetracked by the other baddies I had to stop as well. Eventually I happened upon the man who had killed me. However it turned out he had only killed me as part of an initiation ritual into Ra's al Ghul's League of Assassins who then killed him to keep him quiet, following me so far? But it then turned out that this group all had a hook for a hand and that the person I thought killed me had his hook on his left hand rather than the right.

Been through a few other things over the years. Rama Kushna had me battle a sorceress over the lives of some deceased costumed heroes. At the same time I paid my dear brother a personal visit, only for him to die while I was hanging around doing the same act I used to do before I was killed. Then I helped run this city where supervillains could live and behave themselves, only it got invaded and destroyed and they were set loose again.

However then something people call the Blackest Night appeared and suddenly everyone was coming back to life, sorta. This included my own body. Turns out everyone had been possessed by black rings and were made to serve some master of death. At the end of it a bunch of rainbow coloured ringslingers managed to defeat this guy, but not before some white rings went and resurrected a bunch of other heroes properly. Somehow this included me. They were calling it the Brightest Day, a whole new start. Me, I had the last white ring on my finger, and no idea what I was supposed to do apart from destroy my own grave. Turned out, the ring had its own ideas, and ended up dragging me around the universe, setting things up so it could take down this master of death's final attack. In the little time I wasn't doing that, I ate some cheeseburgers. Hell, I even got myself a girlfriend. But once entity-thing was done with that - wham, dead again, and still no rest for yours truly.

Oh well, at least I also got to star on TV in an episode of Justice League Unlimited and co-star in an episode of Batman: The Brave and the Bold. A super-deformed version of me starred in a couple of shorts made by the guy who made Chowder, where for some reason I have a raven for a pet. It's kinda adorable actually.

I represent these tropes: