(Mortals who dare to bask in the presence of his greatness, you are instructed to read of his greatness in the voice of Michael Ironside, Ray Porter, Frank Welker, Andre Braugher, Steve Blum, Tony Todd, John DiMaggio, "Weird Al" Yankovic, André Sogliuzzo, Jonathan Adams, or Michael-Leon Wooley. Such is the command of Darkseid.) 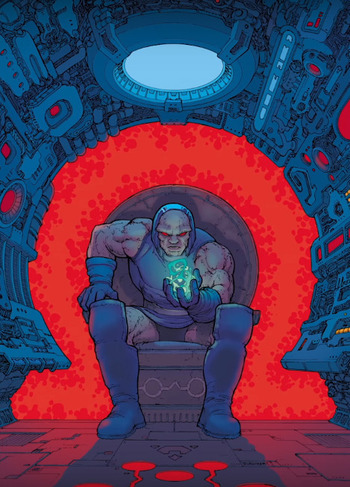 None may compare to true power. Darkseid is that power. Lest you forget it, the price of failure is eternal.
Advertisement:

(The fires of the pits of Apokolips burn brightly, as a throne room approaches into view)

(Be wary to all who approach. Nay, you may not return from this journey, but know that your sacrifice will be done in the name of Darkseid.)

Mortals. Truly you are braver than most. Have you come to swear your fealty to me? Or do you dare to challenge a god? In either case, I feel as if there is something...different about you. You are not the Kryptonian, the Crusader, or the Amazon, yet you seek...knowledge. Then known of this: all that was, is, and will be, is Darkseid. This world you see before you is but the seat of my empire, which spans a thousand worlds of crushed armies and desecrated planets that dared to stand against my might. None have dared to succeed, for they know such an attempt would be futile. I am many things, but above all, I am a God. All of this was made possible by one being, Jack Kirby, who had ironically made me for the very competitor of the reality of which I exist in. Yet it was the others who recognized that the so-called protectors of Earth needed a true challenge to stand in their way, and brought forth my armies to their wretched world. The Parademons under my command have sought to lay waste to each planet, bringing my influence to each corner of the universe...and yet Earth continues to defy me. No doubt it is because they seek to protect its most valuable resource, and my ultimate goal: the Anti-Life Equation. With it, I will bring about the total destruction of free will, and ensure that my reign of all will be swift and absolutely for eternity.

So, for those brave enough to hear of my power, I will grant them that. But know that from this day forward, there is no power greater than Darkseid. I have seen many of the beings on this pathetic website: would-be tyrants, meager criminals, beings who claim to be gods but are mewling whelps barely weaned from the teat, and especially that pale imitation of me.note  Terumi: Who the fuck you callin' a mewlin' whelp you crusty muthafu-*mouth gets suddenly sewn shut* Bill Cipher: I WOULDN'T RECOMMEND TICKING OL' ROCKY OFF, YUUKI-BOY. HIS EYES ARE ALREADY RED WITH RAGE! * the two see an enraged Darkseid ready to fire an Omega Effect* You will not pledge your loyalty to them, any others I have not mentioned, or any others that will join this site. From now on, Darkseid will reign over all. Now come. We have much work to accomplish. But know that if you fail me, you will find that they would have been far more merciful than I ever will be.

And now, mortal, do you truly understand all that is. Have you decided to swear your eternal loyalty to me? For if so, you will be among the first to reap the benefits of my empire. If not, (activates Omega Beams) you have witnessed what my power is capable of. Now, choose. And know that if you choose poorly, no amount of begging will spare you from my wrath. For Darkseid IS.