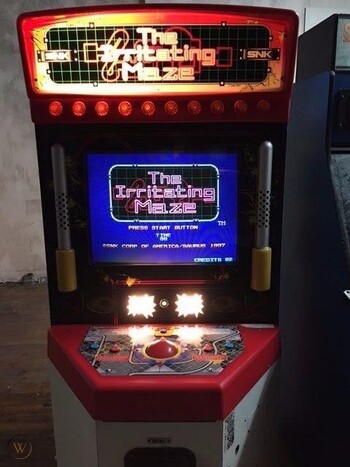 Irritating Maze is an arcade game developed by Saurus and published by SNK and released to arcades in 1997. In 1998 a home port called Irritating Stick was released for PlayStation and was published by Jaleco.
Advertisement:

The game is based on the Japanese game show Ucchan Nanchan no Honō no Challenger: Kore ga Dekitara 100 Man En. The player's goal is to use a trackball to maneuver a metal rod through a course without touching the sides. In the arcade original touching the sides causes the player to feel a jolt of air that is passed off as an electric shock. In the PlayStation version the player simply moves the stick with the controller and the controller rumbles if a course is failed. The original arcade game also features colorful flashing lights designed as a distraction but the home port features a voiceover shouting annoying phrases. The home version is regarded as being of particularly bad quality.

Both games feature the following tropes: