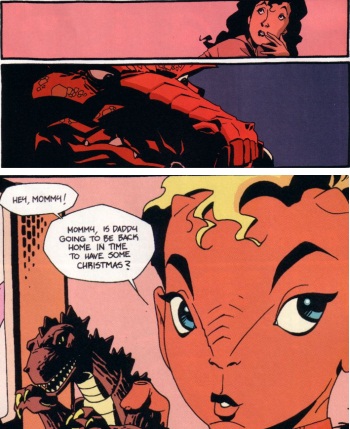 "As it happens, I'm very much human... (sneezes and turns blue) ...on my mother's side."
— Allen Francis Doyle, Angel
Advertisement:

When is the last time you heard of a Half-Human Hybrid who was human on their father's side? As stated under Dhampyr, these creatures' mothers tend to be human, and their fathers... something else. In the case of Vampires and Little People, a human just seems more likely to successfully carry a hybrid to term. Or maybe the idea of a human lady being seduced and ravished by some dashingly handsome male vampire/werewolf/demon/angel/alien/whatever is more alluring to some audiences than the opposite, for whatever reason.

Additionally, a lot of half-human hybrids are the product of rape, love-em-and-leave-em seduction, or tragic romance. Generally, it's easier to justify a Glorified Sperm Donor if he's Not Even Human. Out of our traditional assumption that it is the men who travel and the women who stay home, or the simple biological fact that if a relationship ends or never existed in the first place while the woman is pregnant, she'll end up with the baby, comes the possibility that the child will be brought up among humans.

If the father does stick around in a mixed marriage with the mother, that's still no guarantee of a happy childhood. All will be discriminated against, and chances are one or both parents will be killed by bigots... sometimes inside their own family.

Can be considered a fantastic extension of Ugly Guy, Hot Wife.

Compare Mars Needs Women, where if other species find female humans attractive, it stands to reason that there would be more hybrid children. Such an offspring might result from a Monster and the Maiden partnership. Contrast Boldly Coming note The female tends to a): be really really beautiful, b): die before the story begins, and c): if she stays alive, be the queen of her race. Nonhuman mums generally also belong to more "feminine" races, such as fairies, mermaids, angels, witches, and the like. Also, inversions may have the male as a Retired Badass and the female as part of the Standard Hero Reward.. See also I Hate You, Vampire Dad.