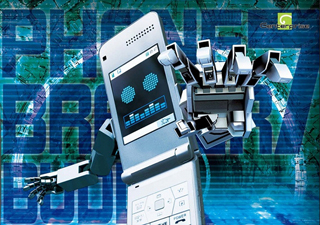 Taking the Call to Adventure to its literal conclusion.
Your feelings have rung true with me!
Advertisement:

K-tai Investigator 7 (also transliterated as Kētai Sōsakan 7 — "Cellphone Investigator 7") is a 2008 toku/drama directed by Takashi Miike, about a 15-year-old highschool student named Keita. Having recently moved from out of town with his family, Keita misses his best friend and, as a result, doesn't pay a lot of attention to what's going on around him, and purposely keeps from making new friends. His classmates even begin to call him "airhead-kun".

On a trip to Mt. Fuji he doesn't tell his family about, to catch up with his old friend, Keita stumbles onto the scene of a rampaging construction vehicle, which has been hacked via the internet into causing as much damage as possible. Before Keita and other civilians can be killed, a man named Sosuke Takimoto appears, and attempts to stop the vehicle with the help of his "buddy", a cellphone with near-sentient AI. Takimoto is less successful than he hopes, receiving fatal injuries during the fight, but Keita helps his cellphone buddy, named Phone Braver Seven, stop the rampaging vehicle.

Keita is thus inducted into the secret: Japan's biggest cellphone service provider, ANCHOR, has a secretive sub-organization named Under ANCHOR dedicated to finding people who attempt to commit crimes via the internet and stopping them. Under ANCHOR agents are each partnered with one of the A.I. cellphones for this task. Takimoto was impressed with Keita's quick actions in the fight, and so asks his superiors as his final request to hire the boy on as his replacement. Thus, teenage Keita is partnered with a walking, talking cellphone and becomes a secret agent.

Being a new agent is not easy with his devil-may-care attitude, but things get difficult very quickly as Keita and his new workmates try to stop the machinations of Phone Braver Zero One, the prototype phone who's gone rogue.