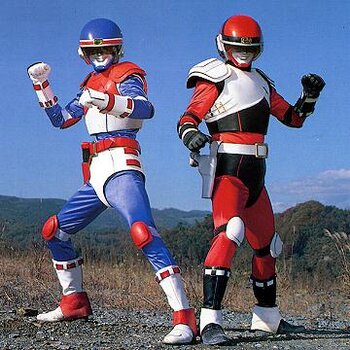 The evil idol Majin Gola is awakened by the Dester criminal organization, whose leader Doctor Q seeks to feed it the screams and suffering of children so it will produce rare gemstones from its mouth for him to add to his collection. In response to Majin Gola's reawakening, the guardian deity of the Hydra system finds two brothers, Ken and Ginjiro Mizuno, chosen from birth, and bestows the power to become the Kyodai Ken Byclosser to defend the planet from Dester and Majin Gola's evil ambitions.

The series is available on YouTube as part of Toei's Tokusatsu World channel. The first episode can be viewed here

Not to be confused with Space Ironmen Kyodain, though the two are similar in concept.