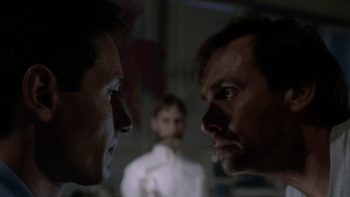 "I know you're scared, Duane, and that you'd like to see this all come out right."
Written and directed by Chris Carter
"I'm not going to hurt you, Doc. Because this time, you're going with Duane Barry so you can see what it's like... that it's real!"
— Duane Barry
Advertisement:

Mulder, along with his new partner Krycek, is called in to help negotiate a hostage situation being pulled by one Duane Barry, a man claiming to be a multiple-time alien abductee. Mulder uses his sister's abduction to build common ground—but is it Duane Barry who is being manipulated, or is he in fact doing the manipulating? And when Scully discovers that Duane Barry is a pathological liar, in addition to a former FBI agent, Mulder turns out to be in as great a danger as the hostages. Or is it possible that Duane Barry was telling the truth all along?

"I NEED YOUR HELP! MULDER! MULDER!"