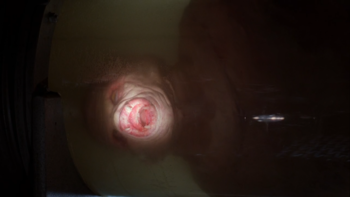 "This is not a man. It's a monster. You can't put it in an institution."
Written by Chris Carter
Directed by Daniel Sackheim
Scully: Flatworms are what are known as obligate endoparasites. They live inside the host, entering the body through the ingestion of larvae or eggs. They are not creatures that go around attacking people.
Mulder: Well, that's good. I didn't want to have to tell Skinner that his murder suspect was a giant, blood-sucking worm.
Advertisement:

When Mulder is assigned to investigate a homicide in a New Jersey Sewer, it seems like the latest step in the Humiliation Conga Assistant Director Skinner has lined up for him. Scully insists on doing the autopsy despite Mulder's dismissiveness of the case, and discovers that the corpse is incubating an oversized flukeworm. And when something man-sized but with worm-like teeth attacks a sanitation worker, Mulder starts getting strangely encouraging calls from a mysterious "friend in the FBI", and even Skinner admits that this should have been an X-File. With the future of the X-Files at stake, can Mulder track down a giant bloodsucking worm before it escapes out to sea? And once they've got it, what can the FBI reasonably expect to do with such a creature?

"You know, they say three species disappear off the planet every day. You wonder how many new ones are being created."