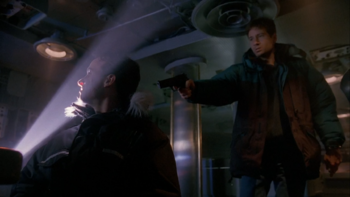 "NOW, YOU TELL ME HOW I CAN FIND HER AND I'LL LET YOU GET BACK TO YOUR SHIP BEFORE IT'S DESTROYED!"
Written by Frank Spotnitz
Directed by Rob Bowman
X: A nuclear submarine located his craft in the Beaufort Sea five days ago. They were ordered to destroy it but they were disabled. An attack fleet left port from Anchorage this morning to make sure this man does not leave.
Mulder: I got to get up there.
Advertisement:

The Alien Bounty Hunter abducts Scully and holds her hostage in exchange for Samantha. Mulder learns that the clones from the previous episode were human-alien hybrids, part of an attempt to establish an alien colony on Earth — and that his apparently-returned sister Samantha is another such clone. Following this discovery, he recklessly pursues the Alien Bounty Hunter for answers.

Scully: Did you find what you were looking for?
Mulder: No. No. But I... I found something I thought I'd lost. Faith to keep looking.