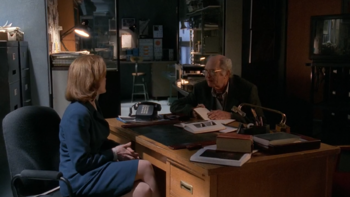 "So you're here to get my version of the truth?"
Written by Darin Morgan
Directed by Rob Bowman
"I spent three months in Klass County and everybody there has a different version of what truly happened. Truth is as subjective as reality."
— Jose Chung
Advertisement:

Jose Chung, a novelist who is writing a book about alien abductions, interviews several people involved in an alien abduction case, including Scully and Mulder. They give wildly and sometimes hilariously varying descriptions of what happened.

"For although we may not be alone in the universe, in our own separate ways on this planet, we are all... alone."