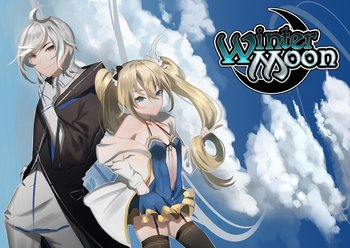 is a webtoon by R. Merryweather and MAYUI.
Advertisement:

Risa is a priest in an MMORPG. Rather than earn her equipment and Experience Points the old-fashioned way, she much prefers using her looks and cutesy demeanor to charm male players into giving her freebies. With her army of besotted admirers, she is arrogant and self-assured...

...Until she runs into Florence, a powerful mage that's very inclined to fry anyone who disrespects him. Also, he’s gay, completely unaffected by her wiles, and thinks she would make a fine "slave healer."

When their altercations destroy a city and get them banned from most of the game, they end up forming a guild with Florence's friend Gideon. Hilarity and mass damage ensue.