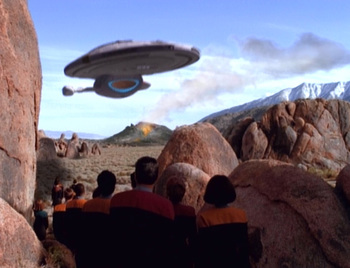 Aren't you guys supposed to be on that?
Seska and the Kazon-Nistrim finally make their move, seizing Voyager and marooning its crew on a primitive planet. While they struggle to survive without their technology, it's up to the Doctor, Tom Paris, and reformed killer Lon Suder to take back the ship.