Film / To Each His Own 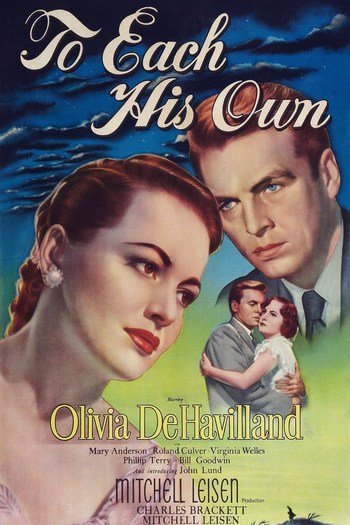 To Each His Own (1946) is a melodrama about the love and losses of Jody Norris, who becomes an unwed mother during the early twentieth century. Mitchell Leisen directs and Olivia de Havilland stars in the film that won her her first Academy Award for Best Actress.

Meeting ace pilot Captain Cogsrove (John Lund) during World War One and falling in love, Jody (de Havilland) gets pregnant and hides this disgrace to protect her reputation and her son’s. With the help of her father, she contrives a plan to make her son a foundling in the eyes of her small town. However, her plan fails and a former beau, Alex (Roland Culver) and his wife, Corinne (Mary Anderson), take Jody’s son as their own.

Jody’s heartbroken since Corinne will never give Gregory (or Grisgly, as they nickname him) back to her. So, she becomes a successful business woman, hoping that one day she’ll be called "Mom".

To Each His Own demonstrates the following tropes: