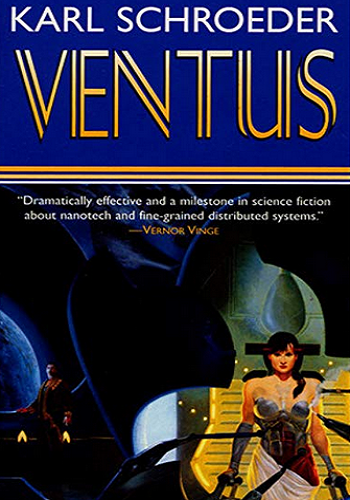 A cover, with a recommendation from Vernor Vinge.
Ventus is is the solo debut of author Karl Schroeder and pretty much introduced the world to the concept of thalience. Ventus mainly takes place on the titular planet, basically created with a combination of A.I. Is a Crapshoot and Terraforming with a health dose of nanomachines.

The main story follows a young Jordan Mason, who, surprisingly, is a stone mason. Jordan lives in a pre-industrial society which is watched by god-like machines called Winds. Jordan has recently began having visions of far away places, living and experiencing everything in the body of one only known as Armiger. However, he soon meets a woman who calls herself Lady Calandria May and her cohort Axel.

Soon, you'll be questioning what it means to be human, how cool it would be to have transdermal armor, and if human-like Artificial Intelligence is ever possible if it's our slave.