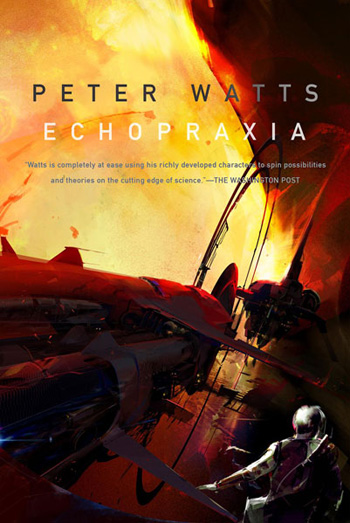 Echopraxia is a hard Science Fiction novel by Canadian author Peter Watts. It is a sequel to the novel Blindsight, though it is set concurrently and the events of both novels take place during roughly the same time period. While Blindsight takes place primarily in the outer Solar System and tells a story of First Contact, Echopraxia instead tells a largely stand-alone story depicting what is happening on Earth and elsewhere in the Solar System.

It's the eve of the twenty-second century. A world where the dearly-departed send postcards back from digital "Heaven" and evangelicals make scientific breakthroughs by speaking in tongues; where genetically-engineered vampires solve problems intractable to normal humans, and soldiers come with "zombie switches" that shut off self-awareness during combat. And it’s all under surveillance by an alien presence that refuses to show itself.

Daniel Brüks is a living fossil: a field biologist in a world where biology has turned computational. Once a cat's-paw used by terrorists to kill thousands, he's taken refuge in the Oregon desert, turning his back on a humanity that shatters into strange new subspecies every heartbeat. But one night he awakens to find himself at the center of a storm that will turn all of history inside-out.

Now he’s trapped on a ship bound for the center of the solar system. To his left is a grief-stricken soldier, obsessed with whispered messages from a dead son. To his right is a vengeful pilot, still searching for the man she's sworn to kill on sight. A vampire and its entourage of zombie bodyguards lurk in the shadows behind. Dead ahead, a handful of rapture-stricken monks leads them all to a meeting with something they will only call “The Angels of the Asteroids”. And their pilgrimage might bring Dan Brüks, the fossil man, face-to-face with the biggest evolutionary breakpoint since the origin of thought itself.

This book features the following tropes (Warning: spoilers below):