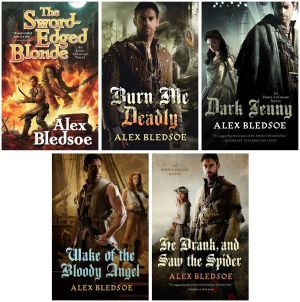 Eddie LaCrosse is the central character of a series of Fantasy novels by Alex Bledsoe. Eddie is a Hardboiled Detective in a fantasy setting, and as such, the series mostly falls within the Fantastic Noir sub-genre (although exactly how much varies a bit from book to book).
Advertisement:

So far, there are five books:

The books are largely self-contained, rather than being instalments of an ongoing story. Some characters carry across, but there's nobody but Eddie who has a major role in more than two. They're not in chronological order, either — one book is a Whole Episode Flashback, and others use flashbacks extensively. 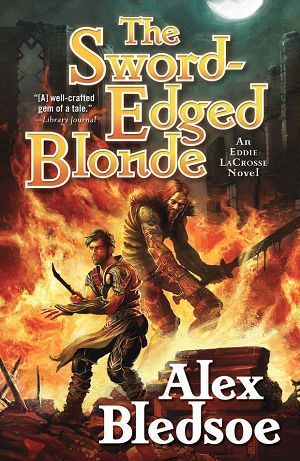 The first book. Eddie, a former courtier who has lived in self-imposed exile for years, is persuaded to return to his homeland to help his old friend Phil — or as he's more widely known, King Phillip. Phil's wife, Queen Rhiannon, stands accused of killing their baby son in a gruesome magical ritual, and just about everyone thinks the case against her is solid — except King Phil himself, who still loves his wife and thinks someone is trying to frame her. Rhiannon herself has always claimed to be an amnesiac, unable to remember anything of her life before meeting Phil, but when Eddie meets her, he's sure he recognises her as someone from his own past. The book follows Eddie's attempts to link the current situation with weird and unpleasant things in his own experiences that he'd rather forget about.
Burn Me Deadly 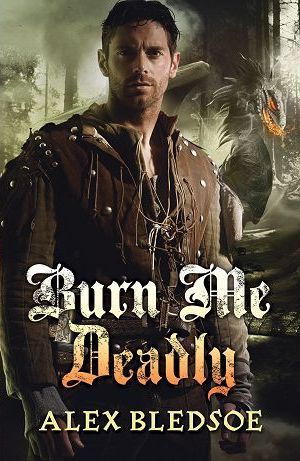 The second book, taking place not too long after the first. Eddie is asked for help by a woman he meets on the road, but the pair of them are promptly jumped by thugs — the woman dies after being unsuccessfully tortured for information, and Eddie himself is left for dead. When he comes to, he's naturally keen to track down the people responsible and do something about it, but since he doesn't know who they were or what they wanted, it's rather difficult. At the same time, a weird religious group is moving into town, backed for no obvious reason by a nasty crime boss and incognito royalty. Also, Eddie's girlfriend isn't being honest with him about something. Naturally, it's all connected.
Advertisement:
Dark Jenny 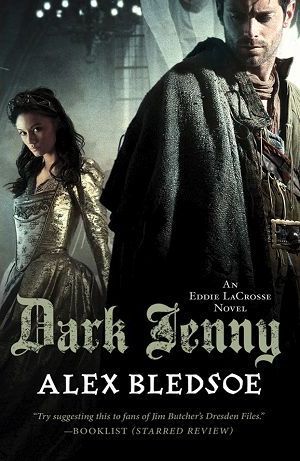 The third book, mostly consisting of a large Flashback to a time before the first book (but with Eddie telling the story to his friends in the present as a Framing Device). Eddie was performing a minor job in the island kingdom of Grand Braun, and would mostly like to just leave again, but gets caught up in local intrigue when Queen Jennifer is accused of murder and adultery — with some saying that he himself was involved, to boot. Since the whole thing could easily turn to civil war, he's ordered to sort it out whether he likes it or not.
Wake of the Bloody Angel 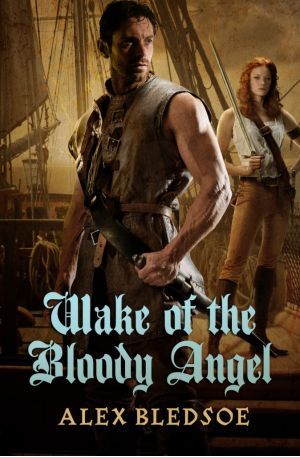 The fourth book, set after all the previous ones (but with mostly new characters, aside from Eddie). It starts when Eddie gets hired by Angelina, owner of the tavern which he frequents (and which his office is above). She wants him to determine the fate of Edward Tew, a notorious pirate who, twenty years ago, happened to be Angelina's lover. Nobody knows what happened to him, but lots of people have tried to find out, since wherever he went, he supposedly took a huge treasure with him. To figure it out, Eddie teams up with Jane Argo, a former colleague now captaining an anti-piracy patrol ship, and sets out to sea.
He Drank, and Saw the Spider 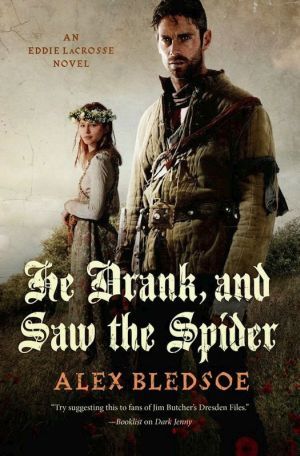 The fifth book. It starts with a flashback to Eddie's mercenary years, when he saved a baby girl with a strange tattoo (and who tattoos a baby?) He left her with a peasant family and moved on. Now, in the present, he returns to the same area (accompanied by his girlfriend, who was out of focus for the previous two books). Curious as to what happened to the child, he goes looking for her — and finds that she is somehow tangled up in all manner of local intrigue, what with feuding (and mentally unstable) monarchs, an incognito prince, sorcery, and the like. Despite originally having been quite keen to ditch the girl and leave, he now finds himself feeling obliged to help her out.

Fortunately for everyone involved, a proper adoptive family is indeed found, and Isidore grows up Happily Adopted.