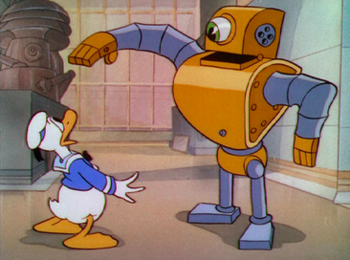 Modern Inventions is a 1937 animated short film from Disney, directed by Jack King. It is notorious for having the first contribution of Carl Barks in the Donald Duck franchise, and being the final Disney short to be released by United Artists.

The short begins with Donald deciding to visit "The Museum of Modern Marvels", which showcases various futuristic electronic appliances and inventions, and enters the museum for free thanks to his trusty coin in a string.

In the museum, Donald encounters and struggles with many strange and whimsical machines, such as a butler robot that constantly chases him and takes away his many hats, a robotic hitch-hiker that pokes him after tricking it, a wrapping machine that is actually dangerous and whose warning Donald ignores, and a fully-automated baby carriage that is a bit overprotective.

The short finishes with Donald attempting to scam a robotic barber chair with the same stingy coin he used to enter the museum and winds up getting a haircut on his behind and a shoe-shined face, throwing a final tantrum when his last hat is taken away by the robot butler.