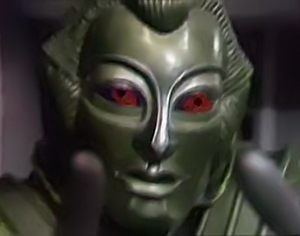 when you need him?note We already made that joke!
Leela: Doctor, what is "robophobia"?
Doctor: It's an unreasoning dread of robots. You see, most living creatures use non-verbal signals. Body movement, eye contact, facial expressions, that sort of thing.
Leela: Body language!
Doctor: Exactly. But while these robots are humanoid, presumably for aesthetic reasons, they give no signals. It's rather like being surrounded by walking, talking dead men.
Advertisement:

The one where a man slaps some Jelly Babies.

Written by Chris Boucher. This four-episode serial first aired from January 29 to February 19, 1977.

This serial begins in the recreation room of a giant sandminer ship belonging to a civilisation utterly dependent on robots. The workers discuss the urban legend of a guy whose arm was ripped off by a robot massaging him. But of course, they all know the robots have tons of safety systems in place and that they could never kill a human, right? Just then, the robots announce that they've detected a sandstorm, which stirs up ores in the sand that are worth a fortune. One poor Red Shirt, Chub, goes into the storage room to collect instruments for a weather balloon when he's strangled by... go ahead, guess. Thus begins a round of Agatha Christie-style paranoid accusations.

Enter the Fourth Doctor and Leela, who materialize in one of the sandminer's scoops. They're brought out by two robots and locked in a room, as the workers of course suspect that the two killed Chub. It doesn't help that after they escape, the two are separately caught in the same rooms as dead bodies #2 and #3. So, the blame game enters Round Two; the crew cannot decide whether the Doctor and Leela did it or one of their own. At any rate, they're locked up in iron shackles in the robot storage room. When a rather nervous man named Poul frees the two out of belief in their innocence, the Doctor points out that they all completely overlooked a possible suspect: the robots. Poul laughs; the robots couldn't possibly kill a human!

While the Doctor tries to convince Poul otherwise, a woman named Zilda goes into Commander (and Large Ham) Uvanov's room and announces over a loudspeaker that she knows he's the murderer, but before she can explain how or why she gets strangled. For those watching at home, the body count is now up to 4. Suddenly, the ship shakes! Turns out, the ship has been sabotaged, and Red Shirt repairman Borg (No, not that Borg) has become dead body #5. The ship can't handle the stress and is about to blow up, but the Doctor cuts out the power and gets a man named Dask to repair the motors so the ship won't sink into the sand. Leela bandages up the hand of acting commander Toos, who heads to her quarters.

Suddenly, a robot named D84 reveals that it and Poul are undercover agents for the mining company. They were placed on board the miner due to threats of a robot revolution by Mad Scientist Taren Capel, who was raised by robots and therefore a bit funny in the head. The Doctor and detective D84 search the miner for proof that Taren Capel is on board, and find a secret workshop where the robots' programming has been changed to enable them to kill humans. He tells Toos over the communications system to get the others and head for the command deck. But as soon as she can get to the door, she's blocked by a strangle-happy robot and just barely gets away by making the door slam onto its hand. Leela manages to find Poul, but he's too busy lying on the ground in the fetal position while he screams about how the robots have always controlled him. Meanwhile, it dawns on the Doctor and D84 that "Dask" is really Taren Capel, and he wants to liberate robots by giving them the ambition to take over civilization. (Meanwhile, Leela makes her way to Toos's bedchambers and the two engage in some very rather sweet Les Yay for a bit.) Taren Capel (now wearing the robots' clothes and metallic facepaint to mimic them) gives his order to the robots: destroy all remaining humans on board. The Doctor realizes that this is the end of this civilization, as the robots they so depend on will become a source of overwhelming fear.

The Doctor comes up with a plan to destroy the robots. They're all being controlled by one particular robot: SV7. If it dies, the others will stop killing. He uses parts from a broken robot to create a final deactivator — a device that will destroy any still-functioning robots at close range. At the same time, Uvanov and Toos have arrived at the command deck and built makeshift anti-robot bombs, which they proceed to kick robo-ass with.

The Doctor hides Leela in Taren's workshop with a canister of helium gas, telling her to release it slowly when Taren comes in. The Doctor hopes that this will change Taren's voice, so his robots — unable to recognize him — won't obey his orders.

Taren arrives and damages D84, but the robot is able to activate the Doctor's device to destroy a killer robot, knowingly sacrificing itself in the process (Dead Body #6...ish?). Leela releases the helium gas, causing Taren's voice to become high-pitched and squeaky, and Taren is killed by SV7 when it fails to identify his voice. The Doctor then destroys SV7 with a laser probe.

The Doctor explains that he used his own respiratory bypass system to keep his Compelling Voice intact, and ponders a bit about how this society might now crash in on itself. He and Leela vworp off.

Chris Boucher wrote a sequel novel, Corpse Marker, and an audio spinoff series based on this story, Kaldor City

. It was produced by Magic Bullet Productions and stars many of the original actors. Another direct sequel, "Robophobia", was written by Nicholas Briggs, and another Kaldor audio spinoff series, The Robots, produced as Big Finish Doctor Who audio plays. Boucher's novel and audio works feature some characters from Blake's 7, and he has said he considers the two series to take place roughly contemporaneously.

David Collings, who appeared here as Poul, went on to play an alternate version of the Doctor in the Big Finish Doctor Who episode Full Fathom Five.

Not big on jelly babies?

Caught in the middle of a murder plot that he (incorrectly) suspects the Doctor of being responsible for, Borg turns down the Doctor's offer of a jelly baby with all the politeness and tranquility of a bulldozer smashing through an occupied home.

Not big on jelly babies?

Caught in the middle of a murder plot that he (incorrectly) suspects the Doctor of being responsible for, Borg turns down the Doctor's offer of a jelly baby with all the politeness and tranquility of a bulldozer smashing through an occupied home.