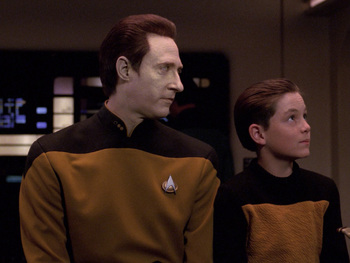 The Enterprise is sent to investigate the disappearance of the science vessel SS Vico, and they find it destroyed inside a "black cluster." They beam over an away team to make a copy of the ship’s computer banks, but while they’re there, they find a young boy trapped in the wreckage—the Vico’s only survivor. The transporters can’t pull him through, so Data lifts up the debris to free the boy and gets him to where the transporters can reach just before the whole room collapses on them. The boy, whose name is Timothy, tells Dr. Crusher that aliens beamed over and killed everyone on the ship. He was only spared because he was hiding. Data turns to leave and let Timothy rest, but Timothy holds on to Data’s hand. Counselor Troi tells Data to stay with the boy for a while.

Geordi points out that there’s no evidence of anyone beaming onto the Vico. Picard wonders whether the boy made up the story for some reason and wants to learn what really happened. Troi suggests having Data spend some time with him, which may make him open up about the truth. He finds Timothy building a model of an ancient temple and promptly tells him it sucks, which hurts the boy's feelings. He tries to make amends by suggesting they build it together but gets called away, so he uses his super-speed to build it in seconds. Amazed, Timothy asks how Data did that. Data explains that his android nature allows him to exceed human potential at the expense of having no emotions. The tradeoff doesn’t sound so bad to Timothy, who decides to live as an android from then on.

Timothy starts dressing and imitating Data, stating that he's "operating within normal parameters." Troi declares that this is an effective way for Timothy to deal with his emotions until he’s ready to face what happened. Picard orders Data to teach Timothy how to be a proper android (the first step, of course, is to slick his hair back). As the two of them spend time together, the Enterprise enters the black cluster, and almost as soon as they do the ship begins to rock violently as it runs into energy waves. Geordi promises to adjust the shields to compensate. Worf begins to pick up the signals of another ship, but they keep disappearing and moving around. They eventually figure out that these are actually echoes of the Enterprise’s own signals reflecting off the wave fronts.

After observing Timothy in class and seeing him laugh and play with the other kids, Troi determines that Timothy is making progress, and encourages Data to help move things along by explaining his own desire to be human to Timothy. Data takes Timothy to Ten Forward for smoothies. Timothy enjoys his drink and asks Data how he likes his. Data explains that he neither likes nor dislikes it, since he has no sense of enjoyment. He says that even though androids have more capabilities than humans and don’t feel sadness, he often thinks that he would be willing to trade that for the ability to taste his food.

The gravitational wave fronts become stronger, rendering the Enterprise’s sensors and phasers useless. This goes to prove that the Vico wasn’t attacked by another ship, because the ship couldn’t have cloaked or fired its weapons. Picard calls Timothy into his ready room to explain what really happened. Timothy confesses that the destruction of the Vico was his fault, because he accidentally touched one of the ship’s computers. The rest of the crew assure him that the computers were designed to make that sort of accident impossible. The Enterprise is rocked by more gravitational waves, and Timothy says that the same thing happened on the Vico. Riker orders the ship to increase shield strength, and Timothy says the Vico tried the same thing. Each time they strengthen the shields, the waves get stronger, until they threaten to destroy the ship. Based on what Timothy said, Data does some quick checks on the computers, then tells Picard to drop the shields. Picard does so, and the next wave passes harmlessly by. Data explains the gravitational waves were reflecting the energy of their shields back at them.

After the children sing a rousing rendition of "Row, Row, Row Your Boat," Data talks to Timothy, who’s no longer acting like an android. He’s still sad about losing his family, but he’s dealing with it. Data tells him that he would be happy to continue spending time with Timothy, which Timothy decides would be... "acceptable."