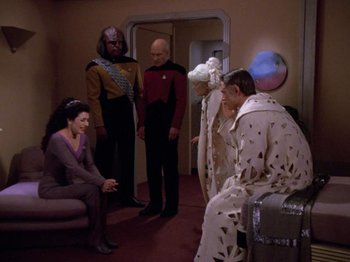 "Oh why do I always have to end up sexually assaulted in some way, shape, or form?"
Advertisement:

The Enterprise is transporting a group of telepathic historians called Ullians: Inad, Tarmin, and Tarmin's son Jev. Tarmin gives a demonstration where he probes the minds of Keiko and helps her remember spending time with her grandmother painting as a small child. Tarmin pressures Dr. Crusher to give it a go, but Crusher politely refuses. Jev reminds his father that he should not have scanned Crusher's mind without permission, but Tarmin jokes that he "can't help himself" when faced with a beautiful woman.

At dinner, Tarmin discusses his intention to build a "museum of memory" and begins pressuring other senior staff to make use of his ability, but everyone turns him down. Jev again tries to rein in his father, which causes Tarmin to start making fun of him. Jev leaves in a huff, and Troi follows him. After commiserating with him in the turbolift over their overbearing parents, Troi exits, and Jev watches her leave with an ambiguous expression. As Troi prepares for bed, she's struck by vivid recollections of an amorous encounter with Riker, but Riker turns violent and gets replaced by Jev in her memories. She falls unconscious.

The crew discovers that Troi has fallen into a coma and cannot revive her or figure out the cause. Riker questions Jev as the last person to see her conscious, and he's suspiciously defensive. Riker then visits Troi and gets emotional talking to her before Crusher advises him to get some rest. While alone, Riker suddenly starts having vivid memories of a containment breach in Engineering where he had to let people die to save the ship. One figure turns into Jev, who accuses him of murdering the crew left behind. Riker, too, falls into a coma.

Crusher notes that the patients' condition superficially resembles Iresine Syndrome. Both patients also have strange residue in their thalamus, the memory center of the brain. Picard is left with no option but to suspect the Ullians. He asks them to consent to monitoring. Inad points out that Keiko has had no ill effects from her experience, but she consents. Tarmin objects strenuously to being under suspicion. While Crusher and La Forge are researching solutions, Crusher begins vividly reliving her visit to view her late husband in the morgue with Picard, but both Picard and her husband turn into Jev. She falls into a coma.

There seems to be no stopping this rash of comas, leaving Picard at a loss, but then he gets some good news: Troi has awoken. Unfortunately, Troi remembers nothing about what happened to her, providing no clues to the investigation. When Picard asks the Ullians to consent to being confined to their quarters, Inad asks Picard to let them use their abilities to help Troi remember the circumstances of her illness and find the true cause. Meanwhile, La Forge and Data discover that outbreaks of "Iresine Syndrome" have followed the three Ullians across the system.

Troi accepts the Ullians' proposition, wanting to know what happened to her. Tarmin refuses to participate, so Jev probes Troi's memory of the event. She recalls her amorous recollection of Riker and how he turned into someone else, but this time, he turns into Tarmin. Tarmin is immediately arrested, though he maintains his innocence. Jev visits Troi to apologize for his father, but his behavior turns creepy as he comments on her beauty and fragility. He starts invading her mind, and Troi realizes that it was him all along. She starts to fight back, and suddenly Worf arrives with a whole security team and rescues her.

It turns out that Data and La Forge noticed that Jev was the only one present for every outbreak of phantom Iresine Syndrome, pointing to him as the real culprit. The exonerated Tarmin apologizes, acknowledging Jev's actions to be a form of rape that has been unknown in his society for three centuries. Picard admits that no matter how enlightened a society becomes, everyone must still resist that seed of violence that hides within us all.

Tropes featured in "Violations" include: