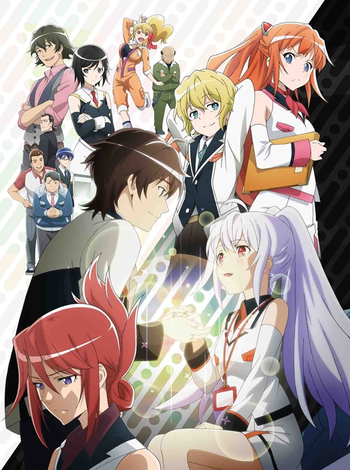 A love story born from digital memories.
"Having happy and beautiful memories won't always bring you salvation. The more beautiful a memory is, the more painful it can become. It can even become terrifying. Both for the one leaving… and for the one left behind."
— Isla
Advertisement:

In the near future, developments in technology has led to advancements of robotics. This has led one company, the SAI Corporation, to design, create and manage Giftias, androids that look and behave almost entirely like humans. Unfortunately, these androids only have a shelf-life of 81920 hours (approximately 9 years and 3 months). Thus, when they reach their expiration date, SAI employees handle the androids and send them to their terminal service department.

After flunking his college entrance exams, the series’ protagonist, Tsukasa Mizugaki, is offered a position at the corporation due to his father’s connections. He is placed at the terminal service department and is ordered to retrieve androids near the end of their lives. There, he forms a team with Isla, a female Giftia who has experience in retrieving androids and serving tea to fellow employees. And thus begins a tale that combines elements of Slice of Life, Science Fiction, workplace comedy and star-crossed romance.

Plastic Memories is a Spring 2015 Anime animated series directed by Yoshiyuki Fujiwara (Engaged to the Unidentified) and written by Naotaka Hayashi (Steins;Gate). It is an Anime First series from Dogakobo, the studio behind series such as Natsuyuki Rendezvous and Majestic Prince. It began airing on April 4, 2015 on Tokyo MX and ended on June 27, 2015.

The series spawned a 20 chapter spinoff manga series Plastic Memories: Say to Good-bye, which stars Michiru and Zack as the main characters. It also spawned a 5 chapter long light novel Plastic Memories: Heartfelt Thanks, published under the Dengeki Bunko imprint.

while viewers living in the UK and Ireland will be able to watch the series on Viewster.

Compare with Blade Runner, Chobits, Time of Eve, or Kowarekake no Orgel.