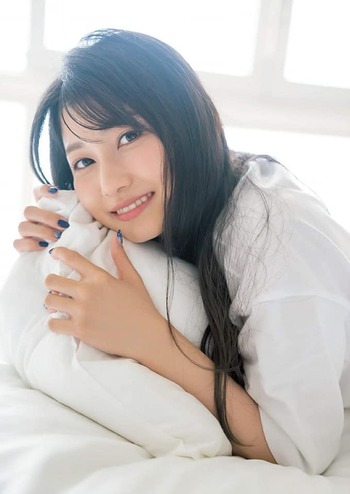 Describe the useless goddess he-
*SHIKT*
Wrong opening sentence eliminated. Describe Sora Amamiya here... (snort)note WHY AM I GETTING SHIKT'D IN MY OWN DESCRIPTION PAGE!? TELL ME WHYYY!?!?!?
Advertisement:

Sora Amamiya is a seiyuu born on August 28, 1993. She is affiliated with Music Ray'n, and forms the unit TrySail with Momo Asakura and Shiina Natsukawa.

She began her voice acting career in 2012 as some minor characters in the anime adaptation of Aikatsu!. Then 2014 turned out to be a Star Making Year for her when she landed multiple lead roles in big name shows like Akame ga Kill!, Tokyo Ghoul, Aldnoah.Zero, and The Seven Deadly Sins, cementing her as one of the biggest rising stars of the Japanese voice acting industry. To further the point, in March 2015 she was one of three voice actresses * The others being Reina Ueda and Aya Suzaki who won the "Best New Actress" award during the 9th Seiyuu Awards held at the Nippon Cultural Broadcasting (JOQR) Media Plus Hall in Tokyo.

called "Tekuteku Tenchannel" or "10ch" with English-subtitled videos. The name is based off the Alternate Character Reading of the kanji for her first name "Sora" as "Ten" (heaven).

Sora Amamiya and her works provide examples of:

W-wait! Hang on, Troper! Why are you going to another page!? You wouldn't... cut the jokes! I'm sorry! I'm so sorry! I shouldn't have done too many stoic roles, so please let me go to another page too! I'm sorry, Troper! Please, Troper-sama!! AAAAA!!! AAAAA!!!