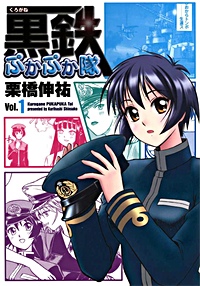 Kurogane Pukapuka Tai is a World War II yuri comedy manga series following the exploits of the fictional Imperial Japanese Navy commerce raiding cruiser Unebi — which is entirely crewed by women except for the captain (who does nothing but drink tea, tend his bonsai, and sleep, it seems). They encounter a German U-boat, the U-800, also crewed entirely by women, and a British destroyer, the HMS Cutlass, commanded by women; most of the women appear to be exclusively interested in the other women. Obviously, the historical accuracy here is high!note Especially with the Nazi persecution of homosexuals in general and lesbians (to a lesser extent) in particular.

That said, the military details aren't utterly ludicrous; the mangaka is obviously a bit of a military otaku as well as a Yuri Fan. All the ships are fictional, of course, as are the military operations, though they're roughly plausible; there were commerce raiding cruisers and the like, described on The Other Wiki

. The backstory of the Unebi is based on the raiders Aikoku Maru and Hokoku Maru; the Unebi, however, is a military vessel in outline, although supposedly construction began as a civilian ship, while the real-life raiders were civilian freighters in outline.

Most of the time, of course, it's simply a device to have sexy women-in-uniform fanservice and plenty of sexual and romantic girl-girl comedic action.