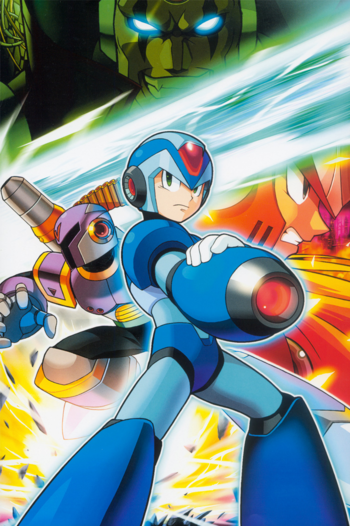 "I urge the people of the future to remember that X is my... nay, the world's hope!"
— Dr. Thomas Light, Mega Man: Maverick Hunter X.
Advertisement:

Mega Man: Maverick Hunter X is a remake of the first game in the Mega Man X series, released exclusively for the PSP.

An expanded retelling of the original Mega Man X story, where our hero X, Dr. Light's legacy, is found by Dr. Cain and his design used to create a new breed of free-thinking robots named Reploids. An outbreak of Reploid defections, however, forces X to join a group called the Maverick Hunters, along with his ally Zero, rival Vile, and the fearless commander, Sigma, to quell these outbursts. However it is not long before Sigma reveals he has gone Maverick himself, leading a widespread Reploid rebellion against humanity. Sigma shows fascination with X, a robot he believes has the power to shape the future, and as well with Vile, who seems to be holding a personal vendetta against the heroic X.

The game also included a bonus animated movie, The Day of Σ, which expands on the characterizations of X, Zero, Vile, and Sigma. It focuses on the fateful day that Sigma made his Maverick status known, and led his Reploid rebellion to attack with the ultimate goal of testing X's potential against his own ambitions.

This game, along with Mega Man Powered Up, were released in hopes of rebooting each of their individual series. Due to poor sales, however, hope for any additional sequels ended with these titles.

The Day of Σ has examples of:

When Vile has X on the ropes, Zero sacrifices himself to level the playing field for his friend.

Alternative Title(s): The Day Of Sigma

When Vile has X on the ropes, Zero sacrifices himself to level the playing field for his friend.