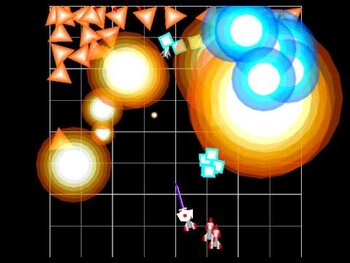 Grid Warrior is a game by Ironcommando and his two friends, as another Gaiden Game to Metaspace.

A strange Grid has appeared in a domain of Metaspace, spawning thousands of hostile Grid creatures hell-bent on taking over the domain. These mindless foes posess strange powers, which they use to destroy the inhabitants of the domain.

You are a Grid Warrior, an Enforcer unit sent down to curb the threat. At the same time, the Enforcers also want you to gather data on these strange foes, specifically their powers, so that they can replicate it into weapon technology.