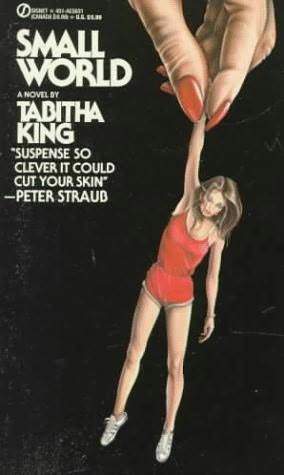 Small World is a 1981 horror-thriller, the first published work by Tabitha King.

Mild-mannered Mad Scientist Roger Tinker has used some government-funded Applied Phlebotinum to build a Shrink Ray, which may actually be a portal into a parallel dimension. That was before Roger was caught in a government lay-off. Now living at home in his mom's basement, he has nothing but time on his hands—time to perfect his invention, time to scheme ways to make money from it, time to dream of other, even more mad inventions. But first he needs a patron.

He finds one in Dorothy "Dolly" Hardesty Douglas, the wealthy, spoiled daughter of a former U.S. President. Now middle-aged, bitter, and having either lost or alienated her little remaining family (as well as nearly everyone who's anyone in Washington D.C.), Dolly's sole remaining passion is miniatures, and the jewel of her collection is a carefully restored, meticulously detailed Doll's White House. But the Doll's White House, while perfect, is empty. What it really needs is an occupant...