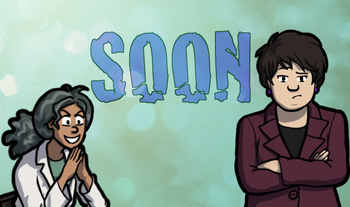 Atlas (left) and Fang (right)
After many years of research you've finally done it.
You've built an actual, honest to goodness, time machine.
It's not fully tested yet but you're pretty sure it won't destroy the universe. And isn't that what really matters?
Your name is Dr C. J. Atlas and soon...
...soon they will ALL PAY. Bwahahahaha
—Our Hero, Ladies and Gentlemen.
Advertisement:

Dr C. J. Atlas is a physicist living a dystopian future dominated by "friendly" robots where people are happy and productive... or else. Disgusted with a Crapsaccharine World under the machines' rule, Atlas has spent years secretly developing a time machine right under their nose and is about to undertake a dangerous mission to Set Right What Once Went Wrong and destroy the machines before they could grow too powerful to defeat...

...and Ret-Gone Dr Fang, Atlas' former student and much more successful Sitcom Arch-Nemesis, who saved the world from global warming. No one is going to complain for a little temporal sidetracking if the world gets saved and nobody even remembers whats-her-name, right?