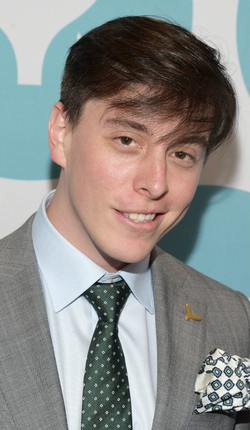 What is up, everybody!
Advertisement:

He got his start on Vine, and had one of the largest Vine follower counts with over 8.3 million in January 2017. Three of his most popular Vine series, "Narrating People's Lives", "Disney Pranks with Friends", and "Pokémon Pranks", received heavy rotation on other social media like Facebook, and he was featured on The View when they did a week-long special on Vine.

While still an active Viner, Thomas also did a number of YouTube videos, usually collaborations with other Viners or YouTubers or Q&A sessions. With the end of Vine as an active social media platform, he's transitioned to YouTube for the bulk of his video content. However, he continues doing short skits in the style of Vine, now renamed as the Sanders Shorts series, which he releases first on Instagram and Twitter, and later on the rest of his social media. From 2019 onwards, his shorts started premiering also on TikTok, where, to his surprise and barely without any promotion, even though he had an account back since the Vine days, when TikTok still was called Musical.ly, he's gathered a huge amount of followers that by 2019 even surpassed his YouTube count by more than a million, growing almost at lightspeed. As of January 2020, he had 4.4 million followers on TikTok. Barely eight months later, on August 2020, he already had 6.5 million followers, almost doubling his YouTube account already, and seven months later, on March 2021, he reached 7.4 million, which means than in barely 15 months, he had grown 3 million followers. By September 2021 he had recovered all the 8.3 million followers he had at the end of Vine and even surpassed this amount.

In late 2016, Thomas began to turn his solo YouTube vlog videos into five-way conversations between himself and four aspects of his personality: Logan, his Logic; Patton, his Morality (also known as Dad); Roman, his Creativity (also known as Princey); and Virgil, his Anxiety. These eventually became a full-fledged series called Sanders Sides. In 2017, he debuted a new web series, Cartoon Therapy, where he plays Dr. Emile Picani, an eccentric therapist for couples who uses cartoons as a way to treat his patients' issues, achieving great results despite his methods. He also releases in his YouTube channel a wide variety of shows, like "Real or Fake Anime" (co-starring Dom Gold), "Voices of Unreason", "I Can't Believe I Never Knew...", "Ask the Experts" (co-starring Joan), "Video Games Through the Ages", later renamed to "Joystick Joyride" (co-starring Joan, Talyn and Camden Foote) and lots of sketches and one-off shows.

Aside from the themes of his content, Thomas is also known for doing a lot of singing in his media, partly because he's a really good singer and partly because he does musical theater. As a singer, he released an EP in 2013 consisting of Christmas songs, and an album in 2016 with the soundtrack of his Ultimate Storytime musical, a show with which he went on tour to 17 cities of the USA and Canada, including Toronto and New York City, and a mini-series of winter concerts online in December 2020. He's also released both on YouTube and on iTunes, Spotify and other platforms several singles from 2017 onward like "The Things We Used to Share", "On the Borderline" or "Recipe of Me" among others, as well as music collabs like "Dear Happy" with dodie or "A Gay Disney Prince" with Jon Cozart. He has an album on the works with songs composed by his friend, Joan. Although the COVID-19 pandemic has slowed down the production of the album, some of the songs, like "Musical Chairs", have already been premiered in live concerts in the meantime, while, as announced by Joan, the album will also include new versions of released songs.

Thomas and his content provide examples of the following:

Take it easy, Guys, Gals, and Non-Binary Tropers! PEACE OUT!!