Recap / The Legend of Korra S1E3 "The Revelation" 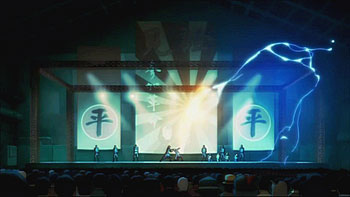 [The spirits] have granted me a power that will make equality a reality: the power to take a person's bending away.

The episode begins with an early morning training session for the Fire Ferrets, which is interrupted when the head of the Pro-bending Arena comes to give them the prize money for winning their match. He immediately takes it all away to pay for equipment, housing, groceries, and to tell the brothers that they had better hand over 30,000 yuans if they want to compete in the finals.

Mako and Bolin, orphans who have lived on their streets, have no money to give, and neither does Korra, who has never had to earn any. Mako assures them that he'll find a way, and takes up a job lightning bending at the local power plant. Bolin's initial idea is to head to the streets and have his fire ferret Pabu earn money through tricks. Unfortunately, the reception is rather lack-luster, so when an old acquaintance offers him a job acting as muscle for the Triple Threat Triads, he can't refuse.

Hours later, Bolin has yet to return, and Mako is nervous. He learns that Bolin isn't on Air Temple Island with Korra. The two of them head back to the city to find him. Their search eventually takes them to the triad's headquarters, a place which is deserted and half-destroyed. Hearing the sound of engines, they rush out back, only to catch a glimpse of a bound and gagged Bolin being ushered into the back of a truck. Before they can do anything, some Gas Mask Mooks throw gas grenades and escape.

Korra and Mako give chase on Naga, but the kidnappers aren't going to let them follow. Two double-back on motorcycles, and manage to trap the polar-bear dog. Korra and Mako throw everything they have at them, but they're like lightning, striking quickly and efficiently. The mooks are chi-blockers as well, able to temporarily prevent bending. Korra and Mako are saved by Naga escaping her bonds just in time. The Equalists escape, leaving Korra and Mako without a clue to where Bolin has been taken.

The pair search in vain through the night. They are about to give up when Korra has an idea. They head to the plaza where she met the Equalist man on her first day in the city. The pair lean against Naga and chat for a bit. Mako explains his Dark and Troubled Past, how his and Bolin's parents died and he took up work for a gang to survive.

The next day, Mako and Korra have fallen asleep, and wake up to the protester's chant. They try to extort him for information. He initially refuses to talk, but he lets slip that the Equalists are having a rally that night where their leader, Amon, will reveal something amazing the world. The heroes make a quick getaway, with Mako snagging a few of their posters. The posters turn out to be a puzzle. On the back there is a map which, when put together, shows the location of the rally.

Disguised as a non-bending couple, Mako and Korra attend the rally and see Amon, the charismatic and masked leader of the movement. He tells of how he and his non-bending family were terrorized when he was a child, and how bending has started every war and conflict. But the age of bending is over, because the spirits have given him something which will change everything: the ability to take away someone's bending permanently. Amon brings out a group of four hostages, members of the Triple Threat Triads, some of Republic City's most notorious criminals. Amon gives their leader a chance to fight and quickly brings him down. He holds the leader by the head and takes away his firebending, leaving him as a quivering wreck.

Korra and Mako know that they have only a few short minutes to save Bolin from the same fate. Noticing the pipe on the nearby wall, Mako has Korra go to the steam room and bend steam as cover while he gets Bolin from the stage. One by one the members are brought before Amon and have their bending removed until finally only Bolin remains. Korra manages to beat a bouncer by slamming him into the pipe, giving her more then enough steam to work with. She covers the rally with it, causing the audience to flee. Amon slips away in the mist while Mako grabs Bolin and they escape out the back. They are pursued by the goggled Lieutenant from the first episode. The two fight him together but are overpowered, until Korra knocks him out. The three get a ride from Naga and flee the area. The Equalists start to follow but Amon calls them off and lets the trio go so Korra can be "a messenger".

Sure enough, Korra returns to the Air Temple and tells Tenzin what she saw. While shocked at the news, he believes her and proclaims if he wields such power, then all benders are in danger. The two look worriedly at the Republic City in the distance as the episode comes to a close.