Film / The Best of Me 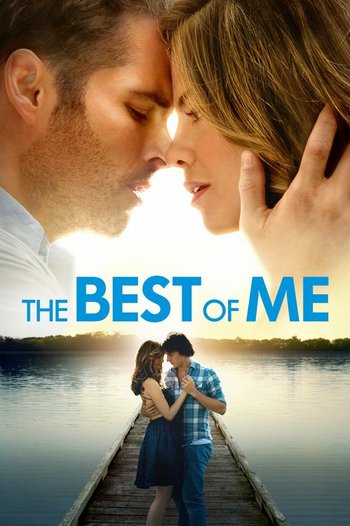 The Best of Me is a 2014 American Romantic Drama film, based on the novel of the same name by Nicholas Sparks. The film was directed by Michael Hoffman, and starring James Marsden, Michelle Monaghan, Luke Bracey, and Liana Liberato.

In 2014, Oil Rig worker Dawson Cole (Mardsen) is caught in an explosion and blown off the rig. Awakening in the hospital, he is released with only superficial injuries, only to be informed that his friend, Tuck (Gerald Lee Mcraney) has recently passed away, and Dawson is summoned to the reading of Tuck's will. At the same time, Dawson's unhappily married ex, Amanda Collier-Reynolds (Monaghan), is also summoned. Together they learn that Tuck left his house to them, forcing them to spend time together cleaning up the house to eventually sell it. Interspersed with this timeline...

In 1992, Dawson (Bracey) meets Amanda (Liberato) when his friend's car stalls and she helps him push it out of the road. Dawson is currently facing the hardship of his violently abusive and criminal family, lead by his hot-tempered father Tommy. Running away from home, Dawson takes shelter in a stranger's garage, who turns out to be Tuck.