Film / The Lucky One 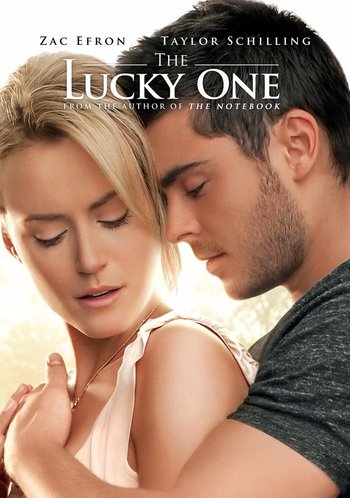 How far would you travel to find love?
Advertisement:

"The Lucky One" is a 2012 Romantic Drama film, directed by Scott Hicks, based on the novel of the same name by Nicholas Sparks. The film stars Zac Efron as Logan Thibault and and Taylor Schilling as Beth Green, with supporting performances by Blythe Danner and Jay R. Ferguson.

U.S. Marine Sgt. Logan Thibault (Efron) returns home from his third tour of duty in Iraq with the one thing he believes kept him alive: a photograph of a woman he doesn't even know. He learns the woman's name is Beth (Schilling) and goes to meet her, eventually taking a job at her family-run kennel. Though Beth is full of mistrust and leads a complicated life as a single mother with an aggressive ex-husband, a romance blossoms, giving Logan hope that Beth could become more than just his good-luck charm.