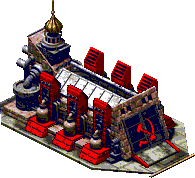 Russian Orthodox Church architecture on a Communist War Factory. A Church Militant's nothing compared to this.
Advertisement:

This trope occurs when a creator will include religious or cultural symbols without realizing that they are religious or cultural symbols for use in a particular context. They'll have seen the imagery turning up in the art of another culture and so use it for that ethnic or fantastical flavor. They'll use a saint's name because they like the sound, or make every building look like a church because they like the pretty arches. This can confound any audience member who knows what those images really are about and wonders, "What's that doing there?"

Contrast with Faux Symbolism. In that trope, the creator knows it has some symbolic meaning and tries to throw these ideas on top of the work in vaguely appropriate situations to try to make things seem deep and meaningful. In this trope, the placement being out of joint with any appropriate context highlights the lack of intended depth.

Can overlap, but is not to be confused with, Dan Browned. Actually, it should be, since there's no field of study called symbology.note It's actually called semiotics.