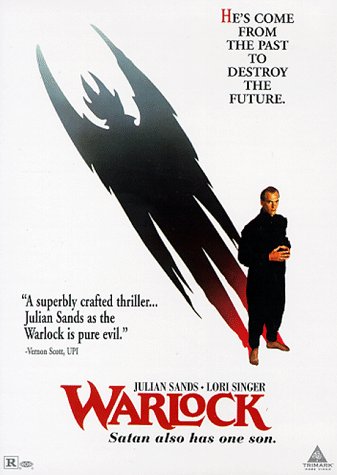 Warlock is a horror film directed by Steve Miner and starring Julian Sands, Richard E. Grant, and Lori Singer. The story opens in the year 1691, where the eponymous villain (Sands) is sent 300 years into the future, arriving in 1991 (technically 1988, as the film was completed that year, but didn't find a US distributor until three years later; it was released elsewhere in 1989-90). He is pursued by witch-hunter Giles Redferne (Grant).

The Warlock is tasked by Satan with finding the three parts of the Grand Grimoire, which contains the true name of God. Redferne meets Kassandra (Singer), a young woman who was cursed by the Warlock to age rapidly until she dies of old age, and informs her that speaking God's true name backwards will cause The End of the World as We Know It. So Redferne and Kassandra join forces to stop the Warlock before he finds all three parts of the Grand Grimoire.

The film was followed by two sequels, Warlock: The Armageddon (1993) and Warlock III: The End of Innocence (1999). 1995 also saw a video game (very) loosely based on the second movie.

Not to be confused with 1959 Henry Fonda Western of the same name.