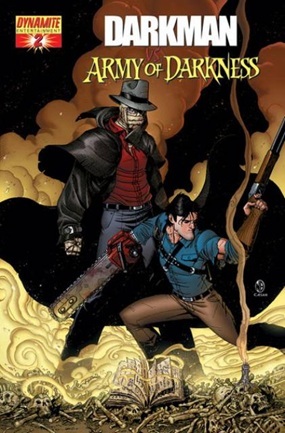 A crossover comic miniseries between Darkman and Evil Dead by Dynamite Entertainment and co-written by Kurt Busiek and Roger Stern.

The incantations in the evil book Necronomicon Ex-Mortis are read aloud in Darkman's city, bringing forth a wave of demonic possessions by the Deadites. Reading the book further eventually summons the great hero Ash Williams, who teams up with Darkman to fight the army of darkness.

Darkman vs. Army of Darkness provides examples of: