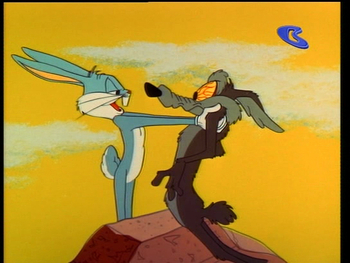 "Daddy! You're back from Peru! Oh Papa, we thought you'd been run over by an elevator!"
Rabbit's Feat is a 1960 Looney Tunes cartoon directed by Chuck Jones, starring Bugs Bunny in his third outing with Wile E. Coyote.
Advertisement:

As Wile E. Coyote is following a track of footprints belonging to a certain rabbit, he introduces himself to the audience and makes it clear that he is a genius and that he plans to eat the rabbit in question. He finally comes upon Bugs and treats him to a picnic just so he can capture and boil him alive, but when it's revealed that Bugs is up to his usual tricks again, Hilarity Ensues.