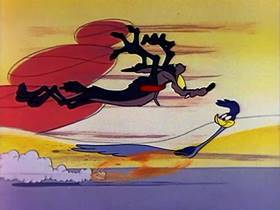 After two failed attempts to catch the Road Runner with a boulder dangling from a rope and a rocket, Wile E. Coyote plots six more to do the bird in, like a slingshot, a clam-shaped rock over an outcropping, a rocket sled not unlike the one seen in "Beep Prepared" two years later, bird seed and iron pellets as well as a magnet and a grenade strapped to a roller skate, a bowling ball through a pipe and a massive steel ball.