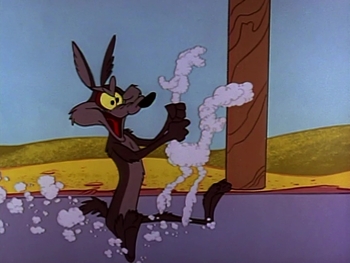 Dust to dust.
Why wait? Make your own earthquakes, loads of fun!
— ACME Earthquake Pills
"Hopalong Casualty" is a 1960 Looney Tunes cartoon directed by Chuck Jones, with Wile E. Coyote and the Road Runner, and an instance of the cartoon title appearing at the absolute end of the opening credits.
Advertisement:

The standard chase scene that opens the cartoon turns into a Hope Spot for the Coyote. When he thinks he’s finally captured his prey, he realizes that he has only a dust impression of him. After a pair of jump scares and getting flattened by the pole, he goes off to prepare for more.

The Coyote begins by lying in wait behind a walled formation… only to be greeted by another speeding truck. From there, it’s yet another collection of sight gags, with the usual results and no real surprises. They are: a boulder on a lanyard; a TNT load in a small tunnel; a Christmas present-making machine; another TNT stick on a fishing hook (which gets caught in the arm of a cactus); and finally, ACME Earthquake Pills, which he uses as birdseed — which, including the “canyon fall gag,” is the longest-running single scene in any Road Runner cartoon.

Ladies and gentlemen, I give you the longest Road Runner gag of all time!

Ladies and gentlemen, I give you the longest Road Runner gag of all time!