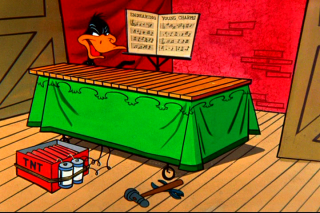 This is not going to end well. note  For Daffy Duck.
"When he strikes this note, instead of a xylophone, he'll be playing a harp! Muhahahaha!"
— Daffy Duck, Show Biz Bugs
Advertisement:

Wile E. Coyote, Yosemite Sam, or some other villainous cartoon character has decided to dispose of the Road Runner, or Bugs Bunny, or whoever. Normal methods have failed... it's time for the Xylophone Gag.

The villain screws a stick of dynamite to the C on a xylophone, puts the sheet music (usually "Believe Me, if All Those Endearing Young Charms") on the stand, and hides, cackling maniacally. Sure enough, the mark arrives, sees the music, and begins to play... but instead of hitting the high note which would set off the bomb, he hits a flat note (or a sharp note, or a pair of clashing notes). The villain winces (as does the audience; it's a very dissonant note), and yells "No, that's all wrong! Try it again!" The Mark does, with the same results. Ultimately, the villain rushes out in frustration, grabs the mallet from The Mark, and says "This is how you do it!", then begins to play the piece at great speed. Kaboom!

Sometimes executed with a piano instead of a xylophone, but though the exact outcome varies, the end results are the same — the smoke clears, the piano keys bounce off the unfortunate villain's skull (or land in his teeth), or the xylophone bars land in a cluster and repeat, or occasionally complete, the music line. It is most often left unstated if the target was aware of the trap and did that on purpose, though the Contrived Coincidence seems to support it.

A subtrope of Musical Trigger. Not usually related to Orchestral Bombing.