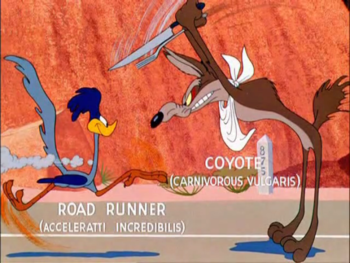 Going! Going! Gosh! is a 1952 cartoon in the Merrie Melodies series, starring Wile E. Coyote and the Road Runner.

After yet another unsuccessful attempt at getting his utensils on the Road Runner, Wile E. formulates new plans like a bow and arrow with dynamite, a giant slingshot, quick-drying cement on the road, tossing a grenade while hiding in the sewers, masquerading as a hitch hiker, a painted picture of a bridge, pushing a boulder down a mountain, dropping an anvil from a hot-air balloon, and finally, lunging at the bird with a javelin.