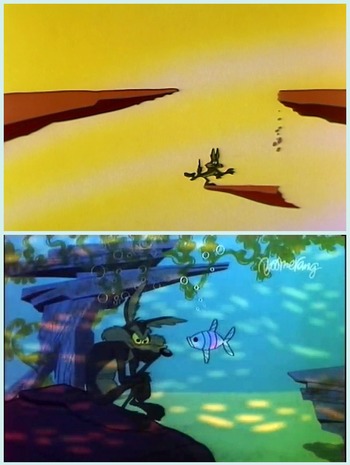 "Hot-Rod and Reel!" is a 1959 cartoon in the Looney Tunes series, directed by Chuck Jones and starring Wile E. Coyote and the Road Runner.

After the duo's latest chase ends with Wile E. Coyote falling into a river (and using the surroundings as a thinking spot), the lanky canid resorts to new abortive schemes, like roller skates, an explosive camera, a trampoline, a crossbow with dynamite, a jet-powered pogo stick, a fake railroad crossing, a lengthy wooden ramp like the one seen in "Zoom and Bored", and finally, a jet-powered unicycle.