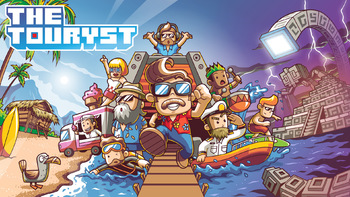 Welcome to the Monument Islands, the finest vacation spot in the world! Here you can relax and take in the beauty of the islands, or engage in several fun activites such as deep-sea diving, surfing, or even mining for diamonds. Or perhaps you're interested in the titular monuments that are scattered throughout the islands? These ancient, mysterious artifacts of the past are the pride and joy of the Islands, visited by many from around the world for their simple grandeur.

Some would even go so far as to say they hold secrets that are no less intriguing and possibly surprising...

The Touryst is a voxel puzzle-adventure game by Shin'en Multimedia, released on November 21, 2019 for the Nintendo Switch. You play as the Tourist as he arrives on Touryst Island to take a vacation on the beach. However, no sooner does he arrive than the local monuments catch his attention. On the advice of an older tourist, he sets out to uncover the various mysteries that those monuments contain...in between the more typical vacation fare, of course.

Not to be confused with the film The Tourist.

Tropes found in The Touryst: