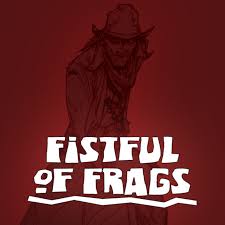 started as a deathmatch mod for Half-Life 2 in 2007. It's an Old West-themed shooter, and period weaponry like revolvers and single-shot rifles reign supreme; all of the guns have limited magazine sizes, are inaccurate, painfully slow to reload and take a long time to chamber another round, but they're deadly powerful.

This selection of weapons gives the game a unique competitive experience - instead of depending on high volumes of lead to take down a target and regenerating health to survive, you must be accurate, composed, and wary of how many shots you have left. Additionally, instead of basing scores on the raw numbers of kills and deaths, players win by amassing the most notoriety. Fragging an enemy with a lower-tiered weapon will yield more notoriety points. Health does not regenerate. The only way to recover lost vitality is by drinking copious amounts of whiskey.

On May 9th, 2014, Fistful of Frags was released for free as a stand-alone game on Steam

using the Source Engine. The new release gained the attention of YouTubers, whose videos are likely responsible for the game's expanded player base.