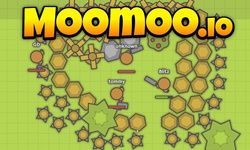 An example of an typical fortress a player's built around themselves.
Advertisement:

is a multiplayer Web Game created in 2017 by an Australian programmer Sidney de Vries, a prolific .io Game developer who also developed games like Driftin.io, Doblons.io and Krunker.io.

It is a top-down 2D spin on survival games, set in the prehistoric times where the players scavenge basic resources like food, wood and stone, which they use to build up weapons, tools and structures to defend themselves and/or fight bosses and other players.

It is also a more actionised take on the genre: you face no risk of actually starving or freezing to death, but there's a levelling-up system whereas you get to choose between mutually exclusive upgrades upon reaching a new "Age". There are Hats and Accessories that provide powerful bonuses, and which can be bought with Gold, in turn obtained through either killing other players or building up Windmills.Later on... It all went to hell, cheaters everywhere, toxic 9 year olds swearing and crashing servers with their hack clients. Sidney De Vries was treated horribly by the Moo Moo community and abondoned Moo Moo... Nice job cheaters...

Has a wiki with plenty of information about the game here